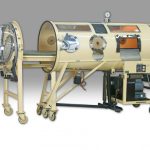 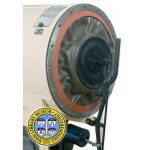 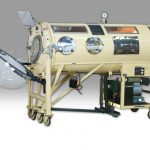 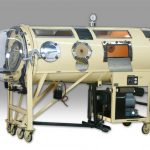 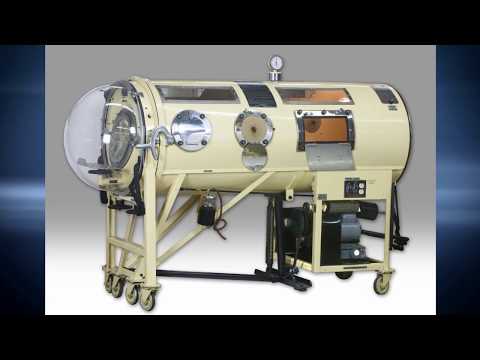 This is an Emerson Respirator, more commonly known as an “Iron Lung”. An iron lung helps a person breathe when the muscles for breathing are not working normally. John Emerson, an engineer of medical equipment, knew of an iron lung made by Dr. Philip Drinker in 1928, and saw the potential for significant improvements. Emerson built and successfully tested his first model in 1931. It was quieter, lighter and less expensive than Dr. Drinker’s device, and by the 1940s, during polio epidemics, some hospital wards were filled with rows of Emerson’s iron lungs. Poliomyelitis, or polio, is a viral infection that can cause varying degrees and types of paralysis (loss of the ability to move and control muscles). From the 1930s to the 1950s, the “Iron Lung” saved thousands of people, mostly children, from dying when the muscles needed to breathe were weakened or paralyzed. The iron lung works by mimicking the way the body’s chest muscles and diaphragm move air into and out of the lungs. The patient lies on a bed with his body inside the sealed tank, and his head outside of the tank. The movement of a diaphragm at one end of the tank alternately increases and decreases the pressure inside the tank to above and below the atmospheric pressure outside of the tank. As the pressure increases in the tank, air is forced out of the patient’s lungs through the mouth, and as pressure decreases in the tank, air is drawn into the patient’s lungs.

Note Type: Physical Description
Notes: A negative-pressure ventilator composed on a large cylindrical tank on four
legs with wheels; There is a clear plastic dome on the end of the tank where
the patient’s head protrudes, and a leather diaphragm on the other end; This
description is based on the perspective of a patient laying in the tank with
his or her head outside of the tank; The entire ventilator measures approx.
144 cm high and 82 cm wide (or approx 4.70 x 2.7 feet); The length of the
ventilator, measured from the end of the dome to the end of the handle for
hand operation, is approx. 245 cm (or 5.75 feet) but can vary depending on
what position the diaphragm is in; Most of the operating features are on the
right side and diaphragm-end of the tank; On the right side of the tank are
two round port-holes and a rectangular bedpan-porthole for quick access to
the patient; Above the portholes are two wide rectangular windows that allow
visualization of the interior of the tank; Between the two windows is a metal
plate, approx 31.5 x 20 cm, with instructions for using the ventilator;
Manufacturer’s markings on the instruction plate include, “SERIAL NUMBER 3R
766”, and “EMERSON RESPIRATOR”; On the plate below the instructions is, “J. H
EMERSON CO.” [new line] “Originators of the modern diaphragm type iron lung
[new line] 22 Cottage Park Ave, Cambridge, Massachusetts, U.S.A.”; Below the
tank near the diaphragm-end of the tank is the motor with rods and levers to
control the diaphragm; Other important features in this area include the
respiratory rate adjustment, negative pressure adjustment, motor and light
switches, and the tilting jack handle; The handle and lever to operate the
diaphragm by hand are located at the diaphragm-end of the ventilator; Below
the tank, on the right side, near the patient-head end of the tank, is a
suction device, bottle, and tubing; On top of the tank is an opening for a
pressure sensing alarm; Just beyond the alarm-opening, a pressure-gauge
protrudes from the top of the tank; The gauge has markings for 0 to negative
45 cm of water (CM H2O) on the left, and 0 to positive 50 CM H2O on the
right; On the left side of the tank are four round portholes for patient
access; Above the portholes are two wide rectangular windows; Under the tank
near the head-end of the ventilator are adjustments for the bed-height; In
the opening of the head-end of the tank is an expandable, plastic collar; The
collar fits around the patient’s neck to seal off the pressure inside the
tank from the pressure outside; On the head-end of the tank are supports for
a mirror; Between the two supports is a small metal plate with manufacturer’s
markings, which include, “Model KAE [new line] No. 744”; The dome is left
open or can be removed when the ventilator is in use; The dome can be closed
and clamped in place to seal the dome/head space; The dome is closed so that
aided respirations can be continued when the tank is open for patient access;
The dome and the bed inside the tank can be rolled away from the tank for
full access to the patient, or to place the patient in or remove the patient
from the ventilator.

Note Type: Historical
Notes: The first tank-ventilator, or iron lung, used in hospitals was developed by
Dr. Philip Drinker and his colleagues in 1928 (Drinker & McKhann, 1986). The
positive and negative pressure in Drinker’s tank was created by an electric
pump that was effective but noisy. John Emerson, a self-taught engineer,
worked closely with physicians while building medical devices and his father
was a professor of public health at Columbia University (Branson, 1998 ;
Emerson, 1998). These ties ensured that he was aware of the Drinker’s
ventilator and its success in saving the lives of young patients severely
affected by polio. Seeing potential for improvements, Emerson build and
successfully tested the first model of his diaphragm-respirator in 1931
(Branson, 1998 ; Emerson, 1998 ; The evolution of iron lungs, 1978). Other
improvements were added to successive models, including an emergency manual
operation handle, tilting and rotation adjustments, and a positive pressure
dome to allow for continued assisted respiration when the tank compartment
was opened for access to the patient. An Emerson marketing catalog produced
in January, 1939 lists the standard [pre-dome] model for $1,400. An Emerson
price-list published in January, 1953 lists the “Emerson Respirator, Dome
Model” for $2,150.

Note Type: Historical
Notes: Negative-pressure ventilators, or iron lungs, were used primarily for polio
patients whose ability to breath was hampered because of severe weakness or
paralysis. Polio, or poliomyelitis, is a viral infection that can cause
varying degrees and types of paralysis. Widespread vaccination after the
development of the polio-vaccine, and advancements in endotracheal tubes and
positive-pressure ventilation lead to decreased use of negative-pressure
ventilators during the mid-1950s (Drinker & McKhann, 1986). According to
Post-Polio Health International in 2011 the number of people using negative
pressure ventilators, such as the iron lung, Porta-lung, 170-C, or a chest
shell/cuirass is between 30-40 (email communication, Feb 16, 2011, from Joan
L. Headly, Executive Director).