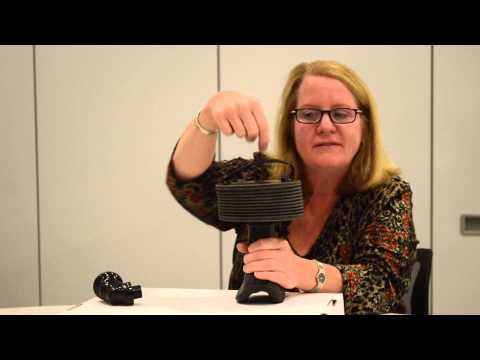 Dr. Joseph Kreiselman (1895-1968) invented several resuscitators. He described this simple bellows apparatus in 1943, while serving as an anesthesiology consultant to the Surgeon General, and it was adopted by the Army for use in World War II. It was made by the Ohio Company, which also made anesthesia machines for use by the United States military. After the war, the apparatus continued in civilian use through the 1960s. It incorporates valves that permit fresh air intake at all times, prevent rebreathing of the exhaled air, and prevent air from being forced into the lungs at excessive pressure. A tube on one end also allowed connection to a source of oxygen. The mask was held in place with one hand, while the bellows were rhythmically inflated and deflated with the operator's other hand. For victims who were supine (lying face up), the mask was connected directly to the bellows. An elbow connector allowed use of the mask on victims who were either lying on one side, or face down (prone.) The latter position also made it possible for a second rescue worker to administer prone pressure resuscitation simultaneously.

Note Type: Physical Description
Notes: One plastic and metal box containing a respiratory resuscitation device; The box is pained army green and the metal corners black; the lid is hinged and closes with a latch; The bellows when compressed 15 x 15 x 12.5 cm (this is without the curved mask extension); When well extended the depth is approximately 22.5 cm.; The end of the bellows has a textile strap for the hand; Printed on the end of the bellows is “U.S. ARMY MEDICAL DEPARTMENT”, and “KREISELMAN [new line] RESUSCITATOR MODEL 110 [new line] MADE BY [new line] THE OHIO CHEMICAL & MFG. CO. [new line] CLEVELAND, OHIO. [new line] PAT. APPL’D FOR. MADE IN U.S.A.”; The mask extension measures approximately 5.5 x 9 x 8 cm.; The black rubber mask measures approximately 12.5 x 9 x 9 cm; The oral airway that is indicated in the included instructional card is not in the box; Inside the box is a worn and torn sticker for the Heidbrink Division Of The Ohio Chemical And Manufacturing Company.

Note Type: Historical
Notes: The Kreiselman Resuscitator was developed in the early 1940s, about 15 years before mouth-to-mouth breathing became the accepted practice. ‘Manual methods’ of artificial breathing where still in use, which included procedures such as the “Schaefer Method” in which pressure was repeatedly applied to the patient’s lower back and released. Another example would be the “Push-Pull” method in which the patient’s arms were pulled above the head and then pressure was applied to the chest or upper back.

Note Type: Historical
Notes: Dr. Joseph Kreiselman (1895-1968), an anesthesiologist, began pioneering work in resuscitation during the 1920s. He had already developed equipment for the resuscitation of newborn infants when he designed the Resuscitator. Kreiselman believed that the manual methods of artificial respiration were ineffective, and that blowing air into the lungs intermittently produced better results. He described the Resuscitator as a light and simple device that was easy to use and inexpensive enough to be made widely available for lay-rescuers as well as medical personnel.

Note Type: Historical
Notes: Valves in the device ensured that only fresh air was delivered to the patient, as opposed to exhaled air from under the mask. Oxygen could be delivered into the bellows through an inlet-valve. A safety-relief valve ensured that the artificial breaths were delivered to the patient at forces below 20 millimeters of mercury. The volume was controlled by the operator of the device, who was taught to compress the bellows only until the chest rose or the pressure-relief valve vented air. The Kreiselman Resuscitators made by the Ohio Chemical & Manufacturing Company, like the one described here, came in a light but sturdy box with a mask, oral airway, an attachment for adjusting the angle of the mask if needed, and a sturdy card with directions for use.

Note Type: Historical
Notes: The Kreiselman Resuscitator was used by the U.S. military during World War II and by US civilians into the 1960s, when it was replaced by mouth-to-mouth artificial breathing and self-inflating breathing bags, such as the Ambu-bag.