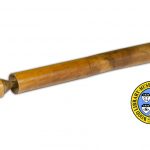 A stethoscope is a device through which doctors listen to sounds in the body, such as heart beats and breath sounds. Before René Laënnec (1781-1826), a French physician, introduced the stethoscope, doctors put their ears directly on their patient’s body. To use the Laënnec ‘monaural’ (hearing with only one ear) stethoscope, the funnel shaped end was placed against the patient and the physician put his ear to the other end. Laënnec devised the first stethoscope in 1816. Modern equipment used to monitor patients' vital signs during anesthesia, such as heart rate, respiratory rate and blood pressure, can be traced back to early wooden stethoscopes like this one. The stethoscope we are familiar with today, binaural (hearing with both ears), became common in the 1850s.

Note Type: General
Notes: Title based on engraved markings on the metal plate on the case.

Note Type: Physical Description
Notes: Stethoscope made of two varnished, hollow wood cylinders and a funnel shaped
‘chest piece’; The two wood (walnut?) cylinders form the body of the
stethoscope and attach to each other via a screw thread; A brass tube fitting
on the chest piece goes into the proximal end (from a patient’s perspective)
of the body and holds the chest piece in place; Both ends are slightly
concave.

Note Type: Historical
Notes: Rene Laënnec, a French physician, devised the first stethoscope in 1816. His
early stethoscopes were longer than the version described and illustrated in
his 1819 text: De l’Auscultation Me´diate. The lineage of modern equipment
used to monitor patients’ vital signs during anesthesia can be traced back to
the early wooden stethoscopes. The familiar binaural stethoscope became
common in the 1850s.