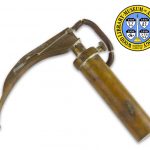 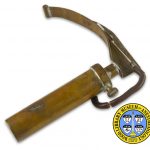 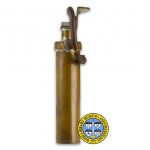 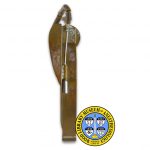 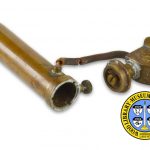 For surgeries that require general anesthesia, anesthesiologists often need to insert a plastic tube into a patient’s trachea (wind pipe) to maintain an open airway and assist breathing. To do this they use a number of tools, including a laryngoscope. A laryngoscope is an instrument used to view the larynx (voice box), which is the opening to the trachea and lungs. It consists of a “blade,” which goes into the patient’s mouth, and a handle. This is a prototype of the curved laryngoscope blade developed by Sir Robert Macintosh (1897-1989) and his skilled technician, Mr. Richard Salt. Prior to 1943 when Macintosh introduced his curved blade, most laryngoscope blades were long and straight. The straight blades were used to directly hold the epiglottis1. Macintosh’s curved blade works differently: it indirectly opens the epiglottis by applying pressure to a space between the root of the tongue and epiglottis, called the vallecula. The flange running along the left lower edge of Macintosh’s blade was also a novel innovation. It was designed to move the tongue to the side, which improved the view of the larynx and made more room for a breathing tube. The Macintosh Laryngoscope remains one of the most popular blades worldwide. This prototype was donated to the WLM by Sir Robert R. Macintosh.
1. Epiglottis: a flap of tissue that covers the opening to the larynx (voice box).

Note Type: Citation
Notes: Jephcott A. The Macintosh laryngoscope: a historical note on its clinical and
commercial development. Anaesthesia. 1948;39(5):474-479.

Note Type: Physical Description
Notes: 1 brass laryngoscope with a curved blade and a cylindrical, hollow handle of
10.5 cm. and 2.5 cm in diameter; The spatula has a smooth gentle curve; When
viewed from the perspective of an anesthesiologist about to insert the blade,
there is a flange on the lower left side; The blade of this prototype lacks
the internally threaded lamp holder, or the conduit tube, of the final design
(Jephcott, 1948); The lamp, protective metal, and latex insulated wire are
visible from the handle to the tip of the lamp on the blade; The remaining
parts of the prototype blade portend the commercial model; The handle of the
prototype lacks the screw-on and -off cap, for battery access, of the
commercial model.

Note Type: Historical
Notes: Sir Macintosh, with the aid of his skilled technician, Richard Salt, was the
first to design a curved blade for indirect elevation of the epiglottis.
Indirect elevation of the epiglottis was discovered by the inadvertent use of
a larger than necessary Boyle-Davis gag during a tonsillectomy. The flange
running along the left lower edge of the blade’s spatula was also a novel
innovation. The Macintosh Laryngoscope remains one of the most popular blades
worldwide.

Note Type: Historical
Notes: Before the introduction of his laryngoscope blade, Sir Macintosh already had
a number of accomplishments to his name including having been a WWI fighter
pilot and prisoner of war. In 1937, he became the first professor of
anesthesia in Britain when he took the newly created Chair of the Nuffield
Department of Anaesthetics, at the University of Oxford. Later during WWII he
trained others to administer anesthesia for the armed services and
participated in the design of a number of devices used during the war,
including the Oxford Ether vaporizer.