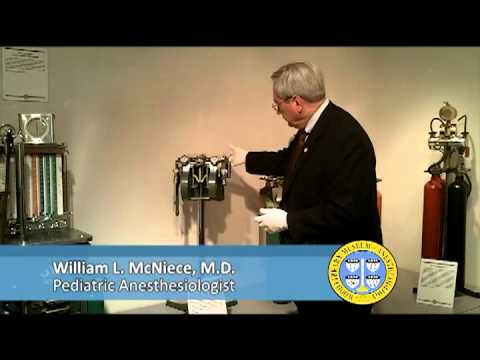 Dr. Elmer Isaac McKesson (1881-1935) was internationally known as an expert in the use of nitrous oxide for general anesthesia. He published extensively on this subject, and even offered graduate courses in the technique. He is best known as an inventor and manufacturer of anesthesia equipment, and the founder of the McKesson Appliance Co. Introduced in 1930, the Recording Nargraf was the first anesthesia machine capable of creating automated anesthesia records. It is but one example of McKesson's creative skills and foresight. The Model J Nargraf pictured here could record onto moving chart paper data useful to the anesthesiologist, such as the patient’s blood pressure, the percentage of oxygen being administered to the patient, and the patient’s respirations. The patient’s heart rate was marked onto the chart paper by hand.

Note Type: With
Notes: On a stand with wheels, approximately 86 cm in height.

Note Type: Physical Description
Notes: The head of the machine includes two reduced pressure gauges on the top of
the machine (one for nitrous oxide (N2O) and one for oxygen( O2); If
additional gasses are employed, an additional reduced pressure gauge is
fastened at the point of attachment of the regulator tubing; Below each
pressure gauge is a cylindrical drum, 4.5 x 16 cm dia.; The drums ‘hang’
parallel to one another, with the wide round sides facing one another; Each
drum contains a supply bag and automatic valve; The automatic valve regulates
the flow of gas into the supply bag intermittently based on the patient’s
respiration (i.e., gas is delivered to the patient upon inhalation and shut
off during each exhalation automatically); Between the two pressure gauges is
a pressure control valve with dial; The graduations on the dial are “OFF”,
“0”, “5”, “10”, “20”, “30” and “40” mm of mercury; In front of the pressure
control valve is a threaded-outlet for gases; Although not integral to the
Nargraf an ether vaporizer and carbon dioxide absorber can be attached to the
Nargraf at the threaded gas-outlet; A mixing valve is located behind the
control dial, in the center of the machine head; The mixing valve regulates
the proportions of N2O-O2 mixture; The mixing valve is topped by a large
circular dial, in the center of which is a round glass window; Markings on
the dial include, “McKesson Nargraf”, “MODEL J”, AND “MCKESSON APPLIANCE CO.,
TOLEDO, OHIO.”; Also marked on the dial are graduations, “0”, “25”, “50”,
“75”, and “100”, which represent the percentages of oxygen; An indicator for
these graduations is located in front of the mixing valve, directly behind
the pressure control dial; Behind the mixing-valve is a micrometer dial; The
micrometer dial is circular with graduations from zero to 49, representing O2
percentages from 0 to 50; To the right of the mixing-valve on the oxygen side
of the head, is a direct, or emergency, oxygen valve; On the rear of the
apparatus is a slot for a book-shaped rubber bellows; The bellows of this
Nargraf are missing; Above the space for the rebreathing bag is a device for
automatically recording information during anaesthesia onto a roll of special
chart paper; The recorder is driven by clockwork gears and can record the
percentage of O2 administered, the tidal volume, inspiratory gas pressure,
and blood pressure; The pulse rate and respiratory rate were to be marked by
hand on the paper; Much of the apparatus is painted a light olive green color.

Note Type: Reproduction
Notes: Photographed by Mr. William Lyle, Sept. 23, 2010; In order to present an
image of the apparatus in the best state possible, this example was
photographed with the following alterations: Hoses from a Narmatic Model O
(accession no. 2005-12-19-1 B1 and B2) were used, along with an ether
vaporizer, CO2 absorber, tanks (or cylinders), hoses, and a mask from the
Parts Collection.

Note Type: Historical
Notes: Elmer Isaac McKesson, M.D., decided to focus on anesthesia during a 1907
internship, which was long before anesthesiology was a recognized medical
specialty. He was an expert in, and advanced the use of, nitrous oxide for
general anesthesia, and he was involved in the formation of a number of
professional anesthesia organizations including the New York Society of
Anesthetists (which later became the American Society of Anesthesiologists),
and the International Anesthesia Research Society (which founded what became
the journal Anesthesia & Analgesia). He is best known as an inventor and
manufacturer of anesthesia equipment, and the founder of the McKesson
Appliance Co. The Nargraf described here was the first anesthesia machine
capable of creating automated anesthesia records. It could record onto moving
chart paper the patient’s blood pressure, the percentage of oxygen and the
pressures of the gasses being administered to the patient, the rebreathed
volume, and respirations in the form of a tidal graph. The Nargraff is but
one of many examples of Dr. McKesson’s creative skills and foresight.