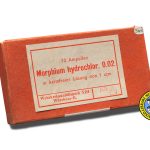 Morphine was isolated from the poppy plant around 1804 by the German chemist, Friedrich Wilhelm Sertürner (1783-1841). Large scale production was begun in 1827, by the German pharmaceutical company now known as Merck.  Both in WWI and WWII, morphine was one of the few treatments available for intractable pain.  Manufactured for military use in Wurzburg, Germany, this box originally held ten ampoules of liquid morphine used for injection. It was captured at the fall of the French port of Cherbourg to Allied troops in July, 1944, during the invasion that began on D-Day.  It was donated to the Wood Library-Museum by U. S. Army Captain Harry Meyer, M.D. the following year.