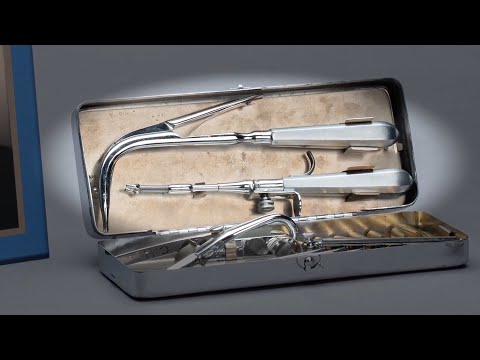 Anesthesiologists are responsible for maintaining the patient's breathing in the operating room, and also provide this support during critical care. Drs. Joseph P. O'Dwyer (1841-1898) and George Edward Fell (1849-1918) pioneered improvements in airway management and ventilation. Dr. Fell introduced his technique of artificial respiration in 1877. He fought to gain acceptance for the use of mechanical ventilation, a superior method of life-saving for victims of drowning and drug overdose. His technique required making a surgical incision in the patient's windpipe (tracheotomy). In 1885, Dr. O'Dwyer introduced his own life-saving method of intubating the larynx (voice box) of young diphtheria victims. Then in 1891, he modified Fell's device by replacing the tracheotomy cannula with a long laryngeal tube, creating the Fell-O'Dwyer Apparatus. The O'Dwyer intubation set includes a mouthgag, and tools for inserting and removing the tubes. An obturator kept the tube from becoming clogged as it pierced through the diphtheria membrane during insertion. When the tube was in place, the obturator was removed, leaving an open airway. O'Dwyer sets continued to be available through the 1960s.

Note Type: General
Notes: Title from a 1926 Tiemann instrument catalog; Early year (1885) of the range
of years for the possible date of manufacture based on the year Dr. O’Dwyer
first introduced his method; Also, a 1887 summary, in the Philadelphia
Medical Times, of a presentation by Dr. William P. Northrup mentions an
O’Dwyer Intubation Set manufactured by Tiemann & Co.; The end year is
generously based on the 1926 Tiemann catalog that listed the set. The date
range could change if documentation indicates the range should be corrected.

Note Type: Citation
Notes: Billington CE. Diphtheria, Its Nature and Treatment ; [with] O’Dwyer J.
Intubation in Croup and Other Acute and Chronic Forms of Stenosis of the
Larynx. New York: William Wood and Co.; 1889.

Note Type: Citation
Notes: O’Dwyer J. Fifty cases of croup in private practice treated by intubation of
the larynx, with a description of the method and of the dangers incident
thereto. Med Record. 1887;32(18):557-561.

Note Type: Physical Description
Notes: One wood box with two hinges and two latches; The stain or wood is red; There
are no markings on the exterior of the box; The interior has built in blocks
of wood carded to hold the various instruments of different shapes; Marked on
the interior of the upper lid is, “GEORGE TIEMANN & CO. [new line] 107 PARK
ROW [new line] NEW YORK”; The instruments held within the box are those
designed at the direction of Dr. Joseph O’Dwyer for the intubation of
children; They include 1 introducer, 1 extractor, 1 mouth gag, 1 scale and 6
small endotracheal tubes; Both the introducer and extractor have handles that
appear to be made from the early plastic called celluloid; The handle of the
introducer seems to have some areas where it was exposed to heat and was
burned; Marked on the handle of the introducer is “G. Tiemann and Co.”;
Marked on the handle of the extractor and mouth gag is “TIEMANN & Co.”; The
scale is marked with “TIEMANN”; The six tubes are gold or brass in color and
vary in size from 1.7 to 7 cm in length (obturator included); The scale is on
a bar of metal that measures approximately 7.7 cm in length and 1.3 cm wide;
The bar is marked with numbered lines, “1,” “2,” “3-4,” “5-7,” “8-10,” and
“11-13”.

Note Type: Historical
Notes: During the late 1800s, before the development and widespread use of a
vaccination, recurring epidemics of diphtheria were a common cause of illness
and death in children. Diphtheria is a highly contagious infection caused by
a toxin producing bacterium associated with a thick greyish coating in the
throat. This coating, or pseudomembrane, can expand to block the windpipe and
make it difficult to impossible to breath. In fact, one of the nicknames of
diphtheria was ‘the strangler.”

Note Type: Historical
Notes: In his New York City private practice and at the Founding Asylum, Dr. Joseph
O’Dwyer (1841-1898), a native of Cleveland, Ohio, cared for countless numbers
of children suffering from the effects of diphtheria. Performing a
tracheotomy (making an incision on the outside of the neck to create an
opening and insert a tube in the windpipe) was an option, but during Dr.
O’Dwyer’s time it came with a very high failure rate in children.

Note Type: Historical
Notes: Under these circumstances, in 1880 O’Dwyer began to study the anatomy of
diphtheria victims at autopsy, and undertook the development of tubes that
could keep a child’s airway open. After abandoning a number of early designs,
he described some of his initial successes at a meeting of pediatricians in
June of 1885. The first intubation set that O’Dwyer developed contained five
small tubes measuring about 1.5 to 2.5 inches in length. The size of tube
used was based on age. To place the tube, the child was seated and held in an
attendant’s or nurse’s lap and a device to hold the child’s mouth open (mouth
gag) was inserted. To insert the tube into the child’s larynx (voice box)
with a tool called an “introducer”, the physician placed his left index
finger into the child’s throat to act as a guide. Provided that the tube
remained in place and did not plug from mucous, it was removed after an
average of five days.

Note Type: Historical
Notes: O’Dwyer’s method significantly increased a child’s chances of survival and,
despite problems with the system, his work demonstrated that a tube inserted
deep in the airway could not only allow air to enter and exit the lungs, and
secretions to be coughed out, but it could be well tolerated over a number of
days. Proof of this concept encouraged further progress, and Dr. O’Dwyer is
recognized as one of many physicians to contribute to the development of the
safe and effective intubation methods used by anesthesiologists in the care
of patients today.

Note Type: Historical
Notes: Sadly, Dr. O’Dwyer died in 1898 from complications of a diphtheria infection
that he likely acquired while caring for a young patient.