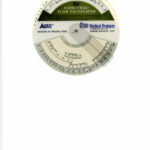 From the late 1950s through the mid-1970s, the Verni-Trol Vaporizer was an optional feature of the Ohio Company's Kinet-O-Meter anesthesia machines. The Standard model held 600 cubic centimeters (cc) of liquid anesthetic; the smaller Side-Arm held 200 cc. Both were calibrated to administer any one of up to three liquid anesthetics. In several respects the Verni-Trol imitated the Copper Kettle Vaporizer, designed by Lucien E. Morris, M.D. (1914-2011) and introduced in 1952 by Ohio’s competitor, The Foregger Company. Like the Copper Kettle, Ohio's Verni-Trol retained heat by means of a substantial metal housing (in this case, bronze) and had a circulating bubble pump. The name “Verni-Trol” echoes Dr. Morris’ descriptions of the Copper Kettle which emphasized its “vernier” precision. With both the Copper Kettle and the Verni-Trol, the operator was obligated to frequently adjust the vapor concentration throughout the course of an anesthetic. Ohio sold several different Verni-Trol flow  calculators. The example shown here provided concentration scales for four liquid agents: di-ethyl ether (also called vinyl ether), halothane, enflurane and methoxyflurane. Some Verni-Trol calculators had concentration scales for as many as nine agents.  Gift of Charles C. Tandy, M.D.