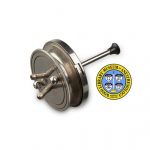 In 1894, Italian physicians Eugenio Bazzi and Aurelio Bianchi introduced their new instrument for listening to the sounds made by the body's organs. The metal base was fitted with an inner diaphragm and a removable outer disc, both made of rubber. A metal rod holding a smaller rubber disk was inserted into the center, and it was this part which was placed on the patient's skin. Two short metal rods were fitted into the back of the base, which connected to two long rubber tubes (missing in this example). The tubes connected at the opposite end to small, glass ear pieces that could be inserted into the auditory canal. The length of the tubes permitted two persons to listen simultaneously. The inventors claimed that the phonendoscope was more sensitive and accurate than other stethoscopes. Although this claim was soon disputed, it remained in production for over 40 years.

Note Type: General
Notes: Although there are no markings to indicate where this phonendoscope was
manufactured, the early year in the date range is based on the date that the
Bazzi-Bianchi was patented in the United States. The end date for the
possible year of manfuacture is a generous estimate. Frequency with with the
Bazzi-Bianchi Phonendoscope is mention in Englsih medical books and journals
decreases significantly after 1915, but the 1942 George Pilling catalog
includes the device. The fact that this phonendoscope was aquired with glass
earpieces indicates that it was likely made before this end-date. The date
range could change if documentation indicates it should be corrected.

Note Type: Citation
Notes: Blaufox MD. The evolution of the binaural stethoscope. An Ear to the Chest:
An illustration History of the Evolution of the Stethoscope. New York:
Parthenon Publishing Group, Inc.; 2002:59-62.

Note Type: Citation
Notes: Blaufox MD. An Ear to the Chest: An illustration History of the Evolution of
the Stethoscope. New York: Parthenon Publishing Group, Inc.; 2002.

Note Type: Physical Description
Notes: One device to amplify sounds for physical examination; The parts for the
device are held in a black leather covered box lined with orange felt; The
phonendoscope with the longer attachment in storage position measures
approximately 3 x 9 x 6.5 cm; with the shorter attachment in the storage
position the width is approximately 7.5 cm rather than 9; The box also
contains glass earpieces; Marked on the phonendoscope is “PHONENDOSCOPE [new
line] BAZZI & BIANCHI”; No manufacture markings.

Note Type: Historical
Notes: The development of stethoscopes for listening to internal sounds of the human
body began in 1816 when René Laënnec (1781-1826), a French physician,
introduced the first such device. The piece described here was introduced in
Rome in 1894. Designed by Italians Aurelio Bianchi, a physician and professor
of pathology, and Eugenio Bazzi, a physicist, it was among the earliest
stethoscopes to use a relatively rigid diaphragm or disk. This design
intensified the sounds in a new and helpful way. In order to distinguish
their new design, the inventors chose the name “Phonendoscope”. ‘Phon’ comes
from the Greek root word for ‘sound’, ‘endo’ for ‘inside’, and ‘scope’ for
‘observe’.

Two long rubber tubes, with earpieces, connected to short ports that extend
from the Phonendoscope. The earpieces were a modification added in 1896.

Also in 1896, British physician Robert Kirk may have been the first to
evaluate and report on the utility of monitoring patients’ heart sounds
before and during anesthesia. He switched to a phonendoscope after first
using an older stethoscope for his research.