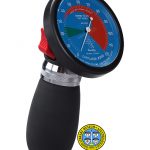 Anesthesiologists may insert a breathing tube into the patient's trachea (windpipe) to administer inhalation anesthesia. Tracheal tubes have been in use since the 18th century, but this did not become common practice until British anesthesiologist, Sir Ivan Magill (1888-1986) began to champion their use in the 1920s. The addition of mechanical ventilation in the 1950s brought a need for better-fitting tubes. Tubes with an inflatable cuff have the advantages of, 1. at least partially guarding the airway from pharyngeal and/or gastric contents and 2. providing a good, adjustable seal for ventilation. The seal should not be so tight as to damage airway structures. With such cuffed tubes came a need to measure the air pressure inside the cuff as it presses on the walls of the trachea. The Posey Company was founded in California in 1937. The Cufflator is manufactured for Posey by VBM Medizintechnik GmbH, in Sulz, Germany. VBM was founded in 1981, and the VBM Cuff Manometer was that company's first product. Since the late 1980s, it has been marketed in the United States as the Posey Cufflator. The device functions both as a cuff inflator and as a manometer to measure, and adjust, the pressure inside the cuff. It was supplied with an extension tube that could be used to help provide continuous monitoring of the pressure inside the cuff. The example shown here was made between 2003 and 2007.

Note Type: General
Notes: The first year in date range is based on the year in which this faceplate design was adopted. The second year in the date range is the year that the object was received by the WLM.

To the left of the gauge, the head holds a red plastic thumb control, called the air vent button; The button can be depressed inward, but returns to its original position when released; This button is used to deflate the endotracheal tube cuff; To the right of the gauge, there is a port for connection to an endotracheal tube; Two removable parts are associated with this port: a connector that screws onto the port, which functions as the point of attachment to an endotracheal tube, and a black rubber cap that can be used to cover the exposed tip of the connector; There is a metal clip on the back of the unit, used to hang the device in place;

The manometer it is seated in a black rubber hand bulb, where it is held in place by a tight metal ring; The visible portion of the bulb is approximately 7 centimeters long and 4 centimeters in diameter; When the connector is attached to a tube, or when the connector is simply covered by the user’s finger, then squeezing the bulb causes the needle indicator to swing in response to the resulting air pressure.

Note Type: Historical
Notes: Anesthesiologists may insert a breathing tube into the patient’s trachea (windpipe) to deliver inhalation anesthesia. While tracheal tubes have been in use since the 18th century, this technique did not become the norm until the 1920s, when it was championed by British anesthesiologist, Sir Ivan Magill (1888-1986). The addition of mechanical ventilation to the process of inhalation anesthesia, in the 1950s, brought a need for better-fitting tubes. Tubes with an inflatable cuff have the advantages of providing a good seal for ventilation and preventing aspiration of stomach contents into the lungs. With these tubes came a need to measure the air pressure inside the cuff.

Today’s cuffed tubes have a secondary tube, a “cuff inflation line”, through which air and gases are passed from the ventilator into the tube, as well as a “balloon” which captures a sample of that air. The air pressure in the balloon is measured in order to determine the pressure in the cuff as it presses on the walls of the trachea. This combination of features is called a cuff system.

The Posey Company was founded in California in 1937. The Cufflator is manufactured for Posey by VBM Medizintechnik GmbH, in Sulz, Germany. VBM was founded in 1981. The VBM Cuff Manometer, as it is known in Europe, was the company’s first product. According to correspondence in the WLM archives, the Posey Cufflator was first marketed in the United States 1991; however, it was described by Chalon in 1986. The Posey Cufflator is identical to the VBM Cuff Manometer with the exception of the brand name on the faceplate. Both VBM and Posey refer to the device as Catalog No. 8199.

A search of the medical literature found seven references to cuff pressure measurement from 1986 (the earliest) to 2000. An identical search for the years 2001 to 2016 found 81 such references, an indication of the increasing use of endotracheal tube pressure monitoring. The cataloged object was donated to the WLM by doctors Susan and Jerry Dorsch, who co-authored Understanding Anesthesia Equipment. This textbook was published in five editions, from 1975 through 2008. The Posey Cufflator is illustrated in the third edition of their book.