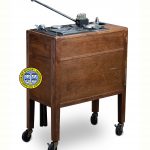 Anesthesiologists are responsible for monitoring the patient's vital signs, including respiration, during and after surgery. American chemist Francis G. Benedict, PhD (1870-1955) is noted for his extensive research on basal metabolism. This is defined as the rate at which the body uses energy to maintain breathing and other vital functions while at rest. Dr. Benedict invented several devices for measuring basal metabolic rate (BMR). By 1921, he had designed the Benedict Respiratory Apparatus, made by Sanborn Company.

Founded in Boston in 1917, Sanborn Company made electrocardiographs and other medical equipment. Benedict's apparatus was the first BMR testing device made by the company. Several other models were to follow over the next decades, including the Metabulator. This apparatus delivered oxygen from a compressed gas cylinder and collected the patient's exhaled carbon dioxide in an absorber. The test required the patient to sit quietly and breathe normally for ten minutes, while the readings were recorded on graph paper. The example shown here was probably made in the late 1940s.