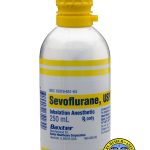 Sevoflurane, an agent inhaled for general anesthesia, was first synthesized by two separate research teams in the 1960s. One of these teams included Bernard Regan, Ph.D. and others at Baxter-Travenol. The other team included Ross C. Terrell, Ph.D., and Louise Speers, Ph.D., of Ohio Medical Products. The Ohio team also was the first to synthesize enflurane, isoflurane and desflurane. Development of sevoflurane for anesthesia did not truly take off until the late 1980s when changes in healthcare resulted in pressure to increase the number of ambulatory surgeries and improve operating room efficiency. This created a demand for inhalation anesthetics that both acted and wore off more quickly than did enflurane and isoflurane, the commonly used inhalation anesthetics at the time. By the 1980s, getting new drugs approved had become a very expensive, multi-stage process. After both Baxter and Anaquest chose not to develop sevoflurane, a Japanese company, Maruishi, decided to pursue it. By 1990, it was approved for use in Japan and quickly became the inhalation agent of choice there. Convinced of Sevoflurane’s advantages over other inhalation anesthetics, Maruishi partnered with Abbott in the U.S. to advance testing here and prepare the agent for FDA approval. Sevoflurane was approved in 1995. Because it brings about anesthesia faster than desflurane, and is less irritating to the respiratory tract, it has become one of the most frequently used anesthetics worldwide. Unlike some earlier inhalation anesthetics, sevoflurane does not impact the ozone layer.