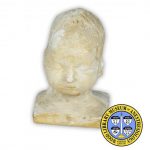 On January 19, 1847, Scottish obstetrician, Sir James Young Simpson (1811-1870) made his first use of ether anesthesia to ease labor pain. This is a plaster cast of the head of the infant delivered that day. Due to the mother’s deformed lower spine and pelvis, the birth canal was very narrow. Although the delivery was particularly difficult and undoubtedly would otherwise have caused severe agony, the mother had no recollection of pain after inhaling the ether. Later in 1847, being dissatisfied with ether, Simpson pioneered the use of chloroform as an anesthetic.

Title: Cast of a head of the foetus [first delivered under anesthesia by J.Y. Simpson].

Note Type: General
Notes: Title from label on base of plaster cast, and from the WLM descriptive name
for the item.

Note Type: Citation
Notes: Simpson JY. On the inhalation of sulphuric ether in the practice of midwifery
In Priestley WO, Storer HR (Eds). The Obstetric Memoirs and Contributions of
James Y. Simpson, Volume 2. Philadelphia: J. B. Lippincott, 1856:221-222.

Note Type: Physical Description
Notes: Plaster cast of a newborn infant’s head; Some lateral compression, with a
large indentation in the right parietal area, and a smaller one over the left
temporal area; Card affixed to base with text: “From the Obstetrics Museum of
the University of Edinburgh [new line] Cast of a head of a foetus [fetus]
extracted 19th January 1847 by turning through a deformed pelvis with a
conjugate diameter of 2 ½ inches. This was the First Delivery under
anaesthesia. J.Y. Simpson.”

Note Type: Historical
Notes: Dr. James Young Simpson, a Scottish physician, was the first to administer
anesthesia to a woman in labor. The woman was in her second pregnancy and
labor and had a deformed lower spine and pelvis. During her first labor, a
craniotomy of the fetus had been required to extract the fetus. Simpson
described the use of ether for the woman’s second delivery in the March, 1847
issue of the Monthly Journal of Medical Science . This account was
republished in 1856 in a collection of his works: “Assisted by Dr Zeigler, Dr
Keith and Mr Figg, I shortly after nine o’clock made the patient inhale the
ether vapour. As she afterwards informed us, she almost immediately came
under the anodyne influence of the ether. I proceeded to turn the infant (as
I had previously predetermined to do). A knee was easily seized and the
child’s extremities and trunk were drawn down but extreme exertion was
required in order to extract the head. At length it passed the contracted
brim with the anterior part of the right parietal bone deeply indented by
pressure against the projecting promontory of the sacrum and the whole
cranium flattened and compressed laterally. The infant gasped several times
but full respiration could not be established. … On questioning the patient
after her delivery, she declared that she was quite unconscious of pain
during the whole period of the turning and extracting of the infant, or
indeed from the first minute or two after she first commenced to breathe the
ether” (Simpson, 1856).