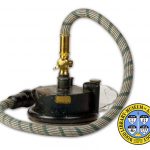 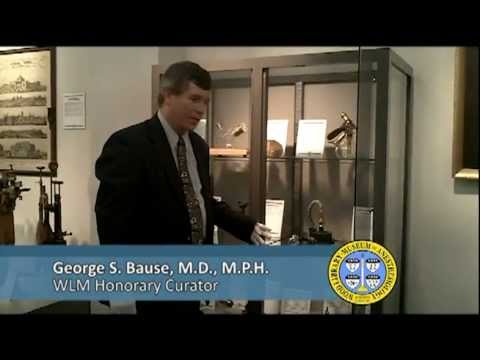 John Snow (1813-1858) was an English physician who is recognized for pioneering work in anesthesiology as well as epidemiology. He was the first physician to specialize in anesthesia, and his studies of both ether and chloroform are considered classics. He is credited with advancing the use of anesthesia for labor pain when many professionals and laymen strongly opposed it. He administered chloroform to Queen Victoria for the births of two of her children, Prince Leopold and Princess Beatrice. The Queen pronounced the effects "delightful", and her approval made obstetrical anesthesia suddenly fashionable. Richard H. Ellis, an English anesthesiologist,  studied Snow's works and classified Snow's inhaler designs into four categories, called 'marks'. Each of these has distinctive features. This inhaler falls into the category that Ellis called 'Mark II'. This design includes a warm water bath to make vaporization more efficient, and a regulating stopcock to control the amount of vapor being administered. Only two examples of this inhaler survive today. Snow is better known as an epidemiologist, who identified the source of a cholera outbreak. His investigative skills were so far ahead of those of his peers that his theory for the cause of cholera was not accepted until eight years after his death.

Note Type: General
Notes: Title from the WLM name for the apparatus.

Note Type: With
Notes: The apparatus has a fragile, wood, green velvet lined case, the lid of which
is very loose.

Note Type: Physical Description
Notes: Inhaler comprised of a round, tin base, a hose and a mouth piece; The metal
base, or vaporizing chamber, with some rusting and chipped black paint; A
metal tube coils around the vaporizing chamber at its base; The coil’s ends
rise perpendicularly to the base; One end has a threaded, brass cap; A second
aperture is also topped by a threaded brass cap; A brass valve and connector
exit straight up out of center of the vaporizing chamber, and connect to
approximately 68 cm of braided textile [covered?] hose; The valve’s brass
turn key is marked with a crown (the Ferguson logo?) and some text, “FERGUSON
[new line] 21 GILTSPURS LONDON”; The hose has an internal diameter of approx.
1.6 cm; A wooden (ebony?) T connector at the proximal end of the hose
contains both an inspiratory and an expiratory valve; The ‘dead’ end of the T
connector has perforations for expired air; The proximal end of the T
connector meets approximately 7 cm of braided textile hose; This short hose
is connected to a glass mouth piece, by a wooden (ebony?) connector; The
mouth piece measures approx. 5 x 8 x 6 cm; A brass plate on the base, reads
“FERGUSON [new line] 21 GILTSPURS [new line] LONDON”.

Note Type: Historical
Notes: This apparatus is believed to be a second prototype of Snow’s ether vaporizer
[or inhaler] (Calverley, 1992). It is very similar the Snow ether apparatus
pictured in the March 19, 1847 London Medical Gazette (p. 501). Henry Connor
and David Zuck described another Snow vaporizer on display at the Royal
College of Physicians (2010). After studying Richard Ellis’s four ‘marks’
they concluded that the RCP’s Snow vaporizer also falls into the “mark II”.

Note Type: Historical
Notes: John Snow (1813–1858) was an English physician who is recognized for
pioneering work in anesthesiology as well as epidemiology. His investigative
skills in epidemiology were so far ahead of his peers that he spent a good
portion of his life defending his discovery that cholera was caused by the
ingestion of contaminated water. His theory was not accepted until 1866 –
Eight years after his death (Ramsay, 2006). Snow’s services administering
anesthetics were in high demand. In designing the anesthetic inhalers he
employed a robust understanding of physiology with careful study of ether’s
effects. He administered anesthesia with similar scientific care. After
investigating a number of deaths that followed an administration of
chloroform, Snow was one of the first to warn against unrestrained use of
chloroform and recommend carefully controlled administration of anesthetics
with the aid of well designed inhalers. His administration of chloroform to
Queen Victoria for the births of two of her children, Prince Leopold and
Princess Beatrice, is credited with advancing the use of anesthesia for labor
pain when many professionals and laymen strongly opposed it (Ramsay, 2006).