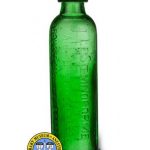 Somnoform was a mixture of three liquid anesthetics: ethyl chloride, methyl chloride and ethyl bromide. It was introduced by Dr. G. Rolland, Dean of the dental school in Bordeaux, France, in 1901. The mixture produced a more lasting anesthesia than did ethyl chloride alone. But it was also more toxic, and it was discredited in the late 1920s. Somnoform, and Somnoform inhalers, were made by several firms. They were used primarily for dentistry and other outpatient procedures. This bottle was made by the original manufacturer of this mixture, the French pharmaceutical company, Rousseau.