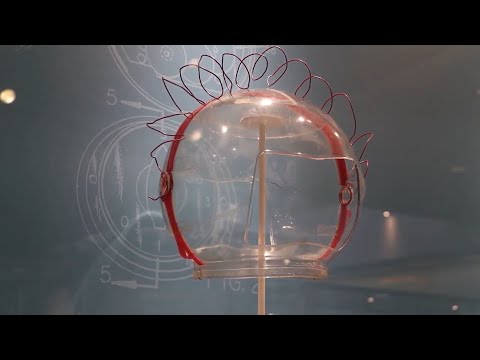 This helmet was originally marketed to fans of the children’s television show, Space Patrol, in the early 1950s. It is open in the back as well as the front, to avoid the possibility of suffocation. The popularity of space adventure shows, together with this safety feature, made it an appealing tool for pediatric surgery. Children could be difficult patients of inhalation anesthesia, panicking when the mask was applied. Several anesthesiologists used modified space helmets and other toys to make it a less frightening experience. Dr. Harry M. Slater (1915-1993) used this helmet for his pediatric patients. In 1955, Dr. Tiina Bougas, then a specialist at Children's Medical Center in Boston, showed how the space helmet and a rubber squeeze toy could be used in operating rooms by children to unknowingly inhale the anesthetics.

Note Type: General
Notes: This helmet matches a plastic toy helmet made by Beemak Plastics of Los
Angeles, and sold under the name, “Space Patrol Outer Space Plastic Helmet”.
The date range for the possible year of manufacture is based around the dates
that the television and radio shows “Space Patrol” ran, 1950 to 1955. The
date range could change if new documentation that indicates that the dates
should be corrected.

Note Type: General
Notes: The title is based on the caption of an image of Dr. Slater next to his
younger brother who models the use of the helmet for inhalation anesthesia.
The image is from a 2003 publication of the Canadian Anesthesiologists’
Society written by Shephard, Chalklin and Pope. The title could change if new
documentation that indicates that the dates should be corrected.

Note Type: Physical Description
Notes: One clear plastic helmet with rectangular openings in the front and back; The
helmet is formed from two halves and held together with red and clear tape;
The tape is quite fragile and the helmet must e handled with care; The helmet
is not accompanied by an inflatable neck piece and ‘oxygen tank’ that the toy
product was sold with; A spiral ‘antenna’ has been formed from red plastic
covered wire, and can be attached to round extensions on each side of the
helmet; With the ‘antenna’ in place the helmet measures 32.5 x 39.5 x 28 cm.;
The helmet alone measures 26.5 x 30.5 x 28 cm.; In the records box in which
the helmet is held are two red rubber ‘goggles’ with velcro straps; The
rubber and a sponge like material of the goggles covers the eyes; No
manufacturer’s marks are found on the helmet.

Note Type: Historical
Notes: Dr. Harry M. Slater used this ‘space helmet’ to ease the anxiety of children
before surgery. It also allowed children to actively participate in the
induction (or beginning) of anesthesia.

Space stories told in radio programs and comic strips of the 1930s and ‘40s,
and in television shows of the ‘50s and ‘60s, were very popular with children
Buck Rogers, Flash Gordon, Captain Video, Space Patrol, and Space Cadet are
just a few of the comics and programs that captured the imagination of young,
enthralled fans. Many of these fans were more than happy to role-play a trip
into space. With the helmet on, children were handed a mask to breathe
through. The mask fit through the large opening in the helmet and delivered
anesthetic gases as well as oxygen.

Dr. Slater, of Montreal Canada, specialized in pediatric anesthesia, and is
also known for developing a nonrebreathing valve with Dr. C. Ronald Stephen.
His space helmet may have been modified from a toy product, and was not the
only helmet used for the administration of anesthesia. Commercial production
of a “Space Helmet” designed by anesthesiologists Dr. D. J. Giorgio and J. G.
Morrow began in 1954. This device was manufactured by Rogay Industrial and
Commercial Models of Washington, D.C.