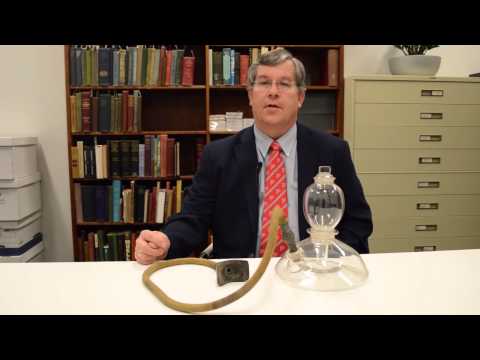 The first ether anesthetic in England was administered on December 19, 1846, by London dentist James Robinson.  He immediately notified the famous London surgeon, Robert Liston (1794-1847), of his success.  That very day Liston engaged a chemist named Peter Squire (1798-1884) to build an inhaler for the administration of ether. On December 21, 1846, Peter Squire's nephew, William Squire, a medical student at the time, administered ether for Liston using his uncle's inhaler. The patient, Frederick Churchill, appeared to sleep through the procedure as Liston surgically removed his right leg. The surgical staff and observers present in the surgical theater were further impressed when the patient regained consciousness and expressed the belief that the amputation had yet to occur.  Liston, who had voiced some doubts about the efficacy of the American discovery, then announced to those in attendance, “This Yankee dodge beats mesmerism hollow!” Liston’s reputation as a great surgeon rested in no small part on the speed of his work, which minimized the patient’s suffering.  Anesthesia would soon put an end to the need for such speed, allowing the development of more careful and time-consuming surgical techniques.

Note Type: General
Notes: The date range for the possible year of manufacture of this inhaler is based
on descriptions of Squire’s inhaler in the January 1, 1847 entry in the
Pharmaceutical Journal and Transactions (all glass inhaler) and the February
1, 1847 issue of Pharmaceutical Journal and Transactions (the inhaler has
metal valves and other features added to it).

Note Type: General
Notes: The title is based on the name for the object in the first two articles in
which the inhaler is mentioned (Apparatus for inhaling ether, January, 1847 ;
Squire, February, 1847).

Note Type: Citation
Notes: Apparatus for inhaling ether. Pharm J Trans. January 1, 1847; 6(7):338.
https://babel.hathitrust.org/cgi/pt?id=uc1.b5586047;view=1up;seq=254. Accessed
March 12, 2015. [An illustration of the inhaler is accompanied by the
following text, “Mr. Squire has contrived an apparatus for this purpose. It
resembles a Nooth’s apparatus – a sponge wetted with ether being placed in
the upper part, the vapour being heavier than atmospheric air, descends
through the tube to the lower vessel, to which is attached a flexible tube
and mouthpiece. In this tube there is a valve to prevent the expired air
returning into the vessel. Mr. Squire informs us that the ether should be
washed with water in order to purify it.” The body of the inhaler described
here is like the inhaler illustrated in the January issue of Pharmaceutical
Journal and Transactions in that it is all glass. It is not topped by a metal
cap, funnel and valve like the ‘improved’ version, illustrated in the
February issue, was. Nor does it have a support for “a collar of sponge
around the descending tube in the lower vessel.”].

Note Type: Citation
Notes: Squire [P]. On the inhalation of the vapour of ether, and the apparatus used
for the purpose. Pharm J Trans . February 1, 1847;6(8):350-352. https://babel.
hathitrust.org/cgi/pt?id=uc1.b5586047;view=1up;seq=266. [The tubing that
accompanies the example described in this record seems to have all of the
valves that the ‘improved’ version was described with. Page 345 is title page
for this issue.]

Note Type: Citation
Notes: Squire W. On the introduction of ether inhalation as an anaesthetic in London
Lancet. December 22, 1888;132(3408):1220-1221. https://www.grandroundsjournal
com/articles/gr049006/squireoriginal.pdf. Accessed March 8, 2015. [In this
article, written more than 40 years after the event, Dr. William Squire
described believing that, during the anesthesia and surgery of Mr. Frderick
Churchill, exhaled gases entered the inhaler and warmed the sponges. If his
recollection is correct, it may indicate that the original tubing of the
Squire inhaler did not have non-rebreathing valves.]

Note Type: Physical Description
Notes: One glass inhaler; The measurements in the physical description field (27 x
49 x 48 cm) are of the inhaler with all pieces and the tube placed as in the
photographs by Mr. Steve Donisch; For the purposes of measurement and this
description, the side of the inhaler with the port for the tubing was treated
as the front; The glass portions of the inhaler only measure approximately 27
cm in height and 23 cm in diameter at the base; The glass portion of the
inhaler is constructed in two pieces; The top piece is smaller and made to
hold an ether soaked sponge; The glass cap that tops the upper piece is
tightly seated; The lower, larger piece acts as a reservoir for ether vapor;
A port for the tubing is located on the side of the base of the inhaler; The
inside of the port for the tubing is lined with cork; To the left of the port
engraved in cursive lettering is, “Squire [new line] Oxford Street [new
line] London”; The textile tubing, with metal connectors [nickel?], ivory
valve and mouth-piece measure approximately 108 cm in length; The woven
textile of the tubing is brittle; The end of the tubing that fits into the
inhaler’s port appears to have a non-rebreathing valve in the center; Near
the mouthpiece and ivory nonrebreathing valve, is what appears to be the
“ferule” (a simple turn valve that allows the anaesthetist to let some, or no
atmospheric air to enter the tubing when the patient inhales) described by
Peter Squire in a 1847 article; The mouthpiece is black stained wood, and is
crescent shaped, with the concave side for the mouth; There are no dates on
any of the pieces of the instrument.

Note Type: Historical
Notes: The first use of ether anesthesia for a major surgical operation in England
occurred on December 21, 1846 at University College Hospital in London. This
was two days after London dentist James Robinson administered ether to a
patient for a tooth extraction, and a little over two months after Morton’s
successful demonstration of the technique in Boston.

Two days before the surgery was performed, Surgeon Robert Liston (1794–1847)
engaged a chemist named Peter Squire (1798-1884) to build an inhaler for
administration of the ether. On the day of the important event, Peter
Squire’s nephew, William Squire, a medical student at the time, administered
the ether using his uncle’s inhaler. Once the patient, Frederick Churchill,
was unconscious, Dr. Liston surgically removed Mr. Churchill’s right leg and
completed the procedure while Mr. Churchill appeared to sleep. The surgical
staff and observers present in the surgical theater were further impressed
when the patient regained consciousness and expressed the belief that the
amputation had yet to occur.

An illustration of Peter Squire’s inhaler was published in the January, 1847
issue of the Pharmaceutical Journal and Transactions. Improvements to the
inhaler were illustrated and described in the February issue. The example
described here is like the inhaler illustrated in the January issue in that
the body of the inhaler is all glass. It is not topped by a metal cap, funnel
and valve like the ‘improved’ version pictured in February. Nor does it have
a support for “a collar of sponge around the descending tube in the lower
vessel.” However, the tubing that accompanies this example seems to have the
valves, including the, “ferule for regulating the quantity of atmospheric air
admitted,” that was a feature of the ‘improved’ version.