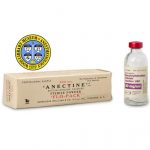 Anesthesiologists administer muscle relaxants (neuromuscular blocking agents, or NMBAs) as part of general anesthesia for some procedures.  NMBAs cause skeletal muscles to be unable to contract.  Some of these are depolarizing agents, which act in part by binding to the body’s receptors of the organic molecule acetylcholine, a neurotransmitter.  The only depolarizing NMBA in clinical use today is succinylcholine.  It takes effect more quickly, and also lasts for a shorter time, than do non-depolarizing agents. It was first synthesized in 1906 by the pharmacologists Reid Hunt and René Taveaux , but at that time its depolarizing action was not known.  In 1949, three independent research groups studied the muscle relaxant properties of succinylcholine.   The best known of these studies was published by Dr. Daniel Bovet (1907-1992) and his colleagues at the Istituto Superiore de Sanità in Rome.  Dr. Bovet later won a Nobel Prize for his work on this and other drugs.   Succinylcholine was clinically introduced in 1951. It is also called suxamethonium (“sux” for short), and has been sold under the brand names Anectine, Quelicin and Sucostrin.