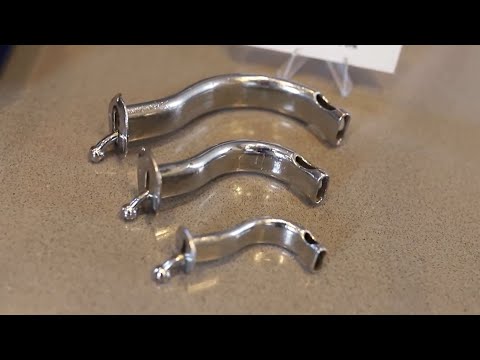 Anesthesia has many effects on the body, including a reduction in the body's ability to breathe normally. Anesthetics also relax the tongue enough that it can block the pharynx (the opening at the back of the mouth.) Artificial airways provide a clear passage through which anesthetized patients can breathe. Ralph M. Waters, M.D., (1883–1979) introduced his oral airway in 1930. It has a side port or “nipple" so that tubing can be attached to deliver air or oxygen. Its metal construction prevented patients from accidentally biting on the airway and blocking gas flow. However, metal airways including the Waters airway were prone to result in cut or bruised lips and dental damage. Three years later, his friend and fellow-inventor, Dr. Arthur Guedel, introduced an airway of similar shape but made of rubber with a metal insert at the level of the teeth. Dr. Waters also 1) invented the “to and fro" carbon dioxide absorber that led the way to closed circuit anesthesia, and 2) introduced the anesthetic use of cyclopropane. He is best known as the founder of the first academic program in anesthesiology, at the University of Wisconsin. He served as President of the American Society of Anesthesiologists (ASA) in 1945, and received ASA’s Distinguished Service Award in 1946.

Note Type: General
Notes: The early year in the date range for the possible year of manufacture was
chosen based on the 1926 Foregger catalog, which does not include the Waters
Airway, and the 1935 Foregger catalog, which does contain the airway. The end
date is an estimate based on the condition (which includes moderate
corrosion) of the airway, The Waters airway can be found in 1960 and 1962
catalogs, but not a 1978 price list. The date range could change if
documentation that indicates the dates should be corrected is discovered.

Note Type: General
Notes: The title is based on the name for the airway in the first few Foregger
Catalogs that it was published in. The name changed to “Waters Airway” in the
1942 catalog.

Note Type: Physical Description
Notes: One metal oropharyngeal airway; The description and measurements are based on
a patient’s perspective, as though the airway is in place; The body of the
tube is wide and flat; Tee proximal end has three fenestrations and an open
tip; The tube is shaped for the oropharyngeal space; The distal end is
flanged to form flat oval disk; A port for a small tube inside the body of
the airway extends from the right side of the distal end; Marked, on flange,
“FOREGGER” and “4”.

Note Type: Historical
Notes: This popular, all-metal oropharyngeal airway was designed by Ralph M. Waters
(1883-1979) and manufactured by the Foregger Company. Introduced around 1930
and originally called the “Waters’ Insufflation or Suction Airway,” it could
be described as a modification of the Connell Airway. In addition to sharing
the structure of the Connell, the Waters Airway had a curved side port for a
small tube that ran inside the body of the airway end-to-end. Tubing could be
connected to the port for the administration of oxygen or anesthetic gases,
or for the suctioning of secretions that collected in the patient’s pharynx.

Ralph M. Waters is recognized for his the development a groundbreaking
ambulatory anesthesia center. A project he began in 1916. He also built one
of the first academic anesthesia departments and residency training programs
in the world at the University of Wisconsin, in Madison. His department was
widely influential and attracted residents and visitors from numerous
countries. Many of his residents, who include Emery Rovenstine (1895–1960),
Robert Dripps (1911-1973), and Virginia Apgar (1909–1974), went on to head
pioneering academic programs of their own. Additionally, Waters’ own research
and the research supported by his department fostered a number of significant
advancements in the practice of anesthesiology, including carbon dioxide
absorption, cuffed endotracheal tubes, and cyclopropane.