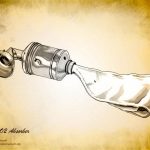 Although carbon dioxide (CO2) absorbers had previously been developed for human use, Dr. Ralph Waters (1883-1979) developed the first simple and easily transportable absorber. Inspired by Dr. Dennis E. Jackson’s (1878-1980) work on CO2 absorption a number of years earlier, Waters developed and began testing his device for filtering carbon dioxide from a patient’s exhaled air around 1919. Waters emphasized the benefits of administering anesthesia using a CO2 absorber. These included a reduction in the amount of anesthetic gas required to anesthetize patients, a reduction in the amount of gas that leaked into the air of the operating room, better humidity of delivered gases, and reduced loss of body heat. Also commonly referred to as the “Waters Canister” and the “Waters To and Fro,” the absorber was introduced in 1924 and continued to be used into the 1960s. Carbon dioxide absorption has become a standard function on all modern anesthesia machines.

Dr. Ralph Waters, an influential anesthesiologist, was known for numerous accomplishments, including the development of anesthesiology’s first post-graduate academic residency and research program, at the University of Wisconsin in Madison.

Note Type: General
Notes: Title from the WLM name for the object.

Note Type: General
Notes: Possible years of manufacture based on the date of a presentation (October,
1923) in which Waters reported that he had been developing and testing the
apparatus for two and a half years (Waters, 1924).

Note Type: Physical Description
Notes: The apparatus consists of a metal mask attached to a carbon dioxide absorber
via ‘L’ shaped metal tubing; The body of the absorber is cylindrical with
conical shaped ends; The mask and canister have numerous dents and the nickel
plating is chipped; Some residue of red rubber is adhered to the distal neck;
Marked on the mask: “W Foregger G”.

Note Type: Reproduction
Notes: Photographed by Mr. William Lyle, 7/15/2010; The bag in the photographic
reproduction is not original to the apparatus.

Note Type: Historical
Notes: Carbon dioxide absorption is a standard function on all modern anesthesia
machines and can be traced back to Ralph Milton Waters, M.D. Although carbon
dioxide absorbers had previously been developed for human use, Dr. Waters
provided the first convenient means for ‘filtering’ carbon dioxide from a
patient’s exhaled air and anesthetic gases. In a 1924 article in Current
Researches in Anesthesia and Analgesia, Dr. Waters described a number of
benefits to administering anesthesia using his “carbon dioxide filtration”
system, including a reduction in the amount of anesthetic gas required to
effectively anesthetize patients, as well as a reduction in the amount of gas
that leaked into the air of the surgical space (Waters, 1924). He described
benefits for the patient as well, in better humidity of delivered gases and
reduced loss of body heat. The Waters Canister was used into the 1960’s to
transport patients. Water’s 1924 article includes a diagram of an early
version of his system on page 21. Images of a later version can be viewed in
a 2001 article by James C. Erickson, M.D. Dr. Waters was a very influential
anesthesiologist known for numerous accomplishments, including the
development of anesthesiology’s first post-graduate academic residency and
research program (at the University of Wisconsin in Madison).