Arnott J. On the effect of chloroform upon the result of surgical operations, 1856. 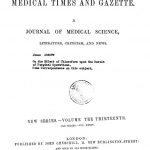 Catalog Record: Arnott J. On the effect of chloroform upon the result of surgical operations, 1856.

Title: On the effect of chloroform upon the result of surgical operations / by James Arnott.

Abstract: Arnott analyses statistics used by James Simpson and others as evidence
that ether and chloroform not only prevent pain but may decrease
surgical mortality. Arnott describes weaknesses in Simpson’s statistics
and argues that the data has been significantly misinterpreted and
misapplied, He then presents his own data, culled from statistical
reports in the Medical Times and Gazette and organized into tables. He
argues that his tables, one, more accurately reflect the outcomes of
surgical amputations in London hospitals before and after chloroform,
and, two, indicate that mortality from surgical amputations has
increased since the introduction of chloroform. Arnott eloquently
questions whether chloroform’s benefits outweigh its dangers: “Is not
so enormous a sacrifice of life too high a price to be paid for
anaesthesia, even granting that this cannot be otherwise obtained with
perfect safety? Is life to be held as nothing when compared to pain?”

General Notes: In a protective enclosure.