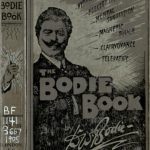 Publisher: London : Printed and published by the Caxton Press, 1905.

Content Notes: Hypnosis & mesmerism — Stage hypnotism — Face to face with the public — The occult scale — The art of self-suggestions — How to produce sleep — Can you be hypnotised? — The dangers of hypnotism — The power of suggestion — Telepathy — Clairvoyance — Magic Mirrors — How I cure my patients — He holds him with his glittering eye — Fiction and the finer forces — Doubting doctors — Motherhood and magnetism — What the papers say about me — A personal explanation.

General Notes: Bodie was a popular entertainer in Britain. Originally from Aberdeen, Scotland, “Dr. Walford Bodie, MD,” also know as “The Electrical Wizard” and “Master of Electricity,” used hypnosis, electricity, and props to “cure” people – usually those suffering from paralysis. Bodie’s ‘degrees and qualifications’ came from fictitious American institutions.They were subjected to close scrutiny in a 1909 court case where he claimed that ‘MD’ stood for Merry Devil. Most considered him a showman and a charlatan.