Bowditch NI. Report of the Board of Trustees of the Massachusetts General Hospital, presented to the corporation, at their annual meeting, January 26, 1848. 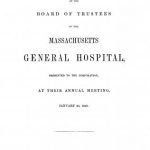 Catalog Record: Bowditch NI. Report of the Board of Trustees of the Massachusetts General Hospital, presented to the corporation, at their annual meeting, January 26, 1848.

Title: Report of the Board of Trustees of the Massachusetts General Hospital, presented to the corporation, at their annual meeting, January 26, 1848

Provenance: The cover of copy two is inscribed to “George Ticknor Esq, with the regard of, N.I. Bowitch.”

Abstract: This report was authored by a committee of two including Bowditch and J. W. Edmands and presented to the Board of Trustees on January 26, 1848. It is written in support of Morton as the discoverer of anesthesia and includes a great deal of factual information of events leading up to Morton’s public demonstration of surgical anesthesia. It caused a reaction among loyal supporters of Charles T. Jackson whom Bowditch addressed in his work titled, “Ether Controversy. Vindication of the Hospital Report of 1848” [WO 211 E81 B785e 1848 RB].

Content Notes: The report is followed by the “Thirtieth annual report of the physician and superintendent of the M’Lean Asylum for the Insane, to the trustees of the Massachusetts General Hospital”: p. 62-72. Includes a front piece illustration of the asylum in Somerville, MA.