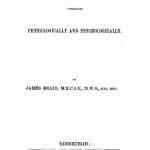 Type of Trace: Reprinted from
Title: The Monthly Journal of Medical Science, for June 1851 with an appendix.

Abstract: This work was derived from Braid’s lecture in Manchester delivered in response to the popular reception of experiments on “electro-biology.” Braid differentiates this phenomen from hypnotism citing experiments he had conducted nine years previously to point out that the hypnotic influence was a psychical and mental phenomenon, not physical nor electric as contended by the electro-biologists.

General Notes: A. E. Waite, an authority on James Braid, pointed out that Braid considered “electro-biology” a pirated mode of his hypnotic phenomenon.