Brown HH. Not hypnotism, but suggestion: A lesson in soul culture, 1918. 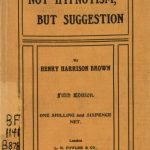 Catalog Record: Brown HH. Not hypnotism, but suggestion: A lesson in soul culture, 1918.

Title: Not hypnotism, but suggestion : a lesson in soul culture / by Henry Harrison Brown.

Type of Trace: Short Title
Title: Not hypnotism, but suggestion.

General Notes: Henry Harrison Brown was one of the elder statesmen of the New Thought movement. Other titles he authored include “Concentration: The Road to “Success,” “Dollars Want Me: The New Road to Opulence,” “How to Control Fate Through Suggestion,” “The Six Steps in Mental Mastery,” “Self Healing Through Suggestion,” and “New Thought Means a Triumphant Democracy.”