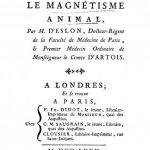 Abstract: This work which was first published in early 1779, summarizes Mesmer’s teachings emphasizing the inducement of crises to cause convulsion in the patient as a way to treat diseases. It was believed that animal magnetism hastened the crisis without producing dangerous and harmful effects on the patient. However, like Mesmer himself, d’Eslon was unable to explain the reasons for magnetic cures of sickness. When Mesmer’s theories were rejected by his profession, d’Eslon defended him, refusing to retract his writings in this work.

General Notes: This work provides special insight on mesmeric treatment described by a contemproary observer who was himself a physicain of credibility in his own profession. It describes 18 case histories of mesmeric treatments, 8 female patients and 10 males including D’eslon himself.