Eddy MBG. Science and health with key to the scriptures, 1905. 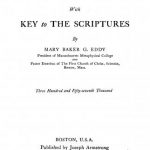 Catalog Record: Eddy MBG. Science and health with key to the scriptures, 1905.

Title: Science and health with key to the scriptures / by Mary Baker G. Eddy.

Abstract: Eddy discusses the mission of the Christian Scientists which was to end the illusory conflict of the mind and body by dispelling the belief in disease, and helping patients achieve harmony with truth. She firmly believed that evil-minded people could manipulate evil mental influence to produce disease and misfortune to others through malicious animal magnetism (M.A.M.)