Emerson EW. A history of the gift of painless surgery, 1896. 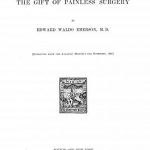 Catalog Record: Emerson EW. A history of the gift of painless surgery, 1896.

Title: A history of the gift of painless surgery / by Edward Waldo Emerson.

Abstract: Originally published in Atlantic Monthly, this article discusses the roles of Charles Thomas Jackson and William Thomas Green Morton in the ether controversy. A protagonist of Jackson, Emerson considers Morton an agent to Jackson in the discovery of anesthesia. He attributes Jackson’s tardiness in making his contribution known to his busy work on geological surveys.

General Notes: “Reprinted from the Atlantic monthly for November, 1896.”