Fothergill J. Observations on the recovery of a man dead in appearance by distending the lungs with air. 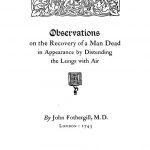 Catalog Record: Fothergill J. Observations on the recovery of a man dead in appearance by distending the lungs with air.

Title: Observations on the recovery of a man dead in appearance by distending the lungs with air / by John Fothergill.

General Notes: “175 copies … following the original copy for spelling, punctuation
and capitalization have been printed for K. Garth Huston, M.D. as a
keepsake for the joint meeting of the Zamorano and Roxburghe Clubs, San
Francisco, September 13-14, 1980.–Colophon.