Franklin B. Report of Dr. Benjamin Franklin and other commissioners charged by the King of France with the examination of the animal magnetism as now practised at Paris, 1785 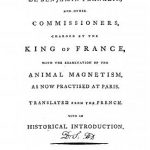 Catalog Record: Franklin B. Report of Dr. Benjamin Franklin and other commissioners charged by the King of France with the examination of the animal magnetism as now practised at Paris, 1785

Title: Report of Dr. Benjamin Franklin and other commissioners charged by the
King of France with the examination of the animal magnetism as now
practised at Paris / translated from the French with an historical
introduction.

Abstract: The Report of the Royal Commission was completed on August 11, 1784,
and signed by Franklin, Majault, LeRoy, Sallin, Bailly, D’Arcet, De
Bory, Guillotin and Lavoisier. Jussieu, the lone dissenter of this
report, was not mentioned throughout. The commissioners witnessed
D’Eslon’s magnetizing establishment and described the process and
impressions in this Report. It was noted that music was part of the
magnetizing process in accordance with Mesmer’s theory. The Commission
concluded that the fluid as an agent to animal magnetism was
non-existent, and “magnetism then is no more than an old falsehood.”
The magnetic phenomena were attributed to the environment of the
magnetic chamber which enhanced excitement to the nerve. The
Commissioners theorized that imagination was the principal element that
caused animal magnetism.

General Notes: There is no evidence of the name of the translator on this work.
However, Maurice M. Tinterow indicated that it was translated by
William Godwin in his Foundations of Hypnosis. The translator
summarized the Royal Commission’s Report of 1784 as an “imposture”.
Yet he gives his reasons for introducing the Report to his English
readers: (1) The Mesmerism movement had caused so much excitement in
France. (2) The Report addressed the influence of imagination
(suggestion) on the subject induced by Mesmerism which Godwin
considered an important contribution to medicine.
General Notes: “Report of a committee of the Royal society of medicine, appointed to
examine a work, entitled, Enquiries and doubts respecting the animal
magnetism, by M. Thouret” [p. 1].