Gream GT. The misapplication of anaesthesia in childbirth, exemplified by facts, 1849. 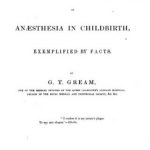 Catalog Record: Gream GT. The misapplication of anaesthesia in childbirth, exemplified by facts, 1849.

Title: The misapplication of anaesthesia in childbirth, exemplified by facts / by G.T. Gream.

Provenance: Copy one inscribed with the author’s compliments to J. Miller.

Abstract: In this work, Gream expanded and supported his case against the use of anesthesia in childbirth. Gream argued that surgery is an abnormal condition that requires anesthesia, while childbirth is a normal bodily function and would be harmful. He also maintained that in surgery, anesthesia would be withdrawn once the patient was anesthetized, while in labor anesthesia was continuous. He considered such anesthetic application to be a form of harmful intoxication.