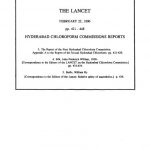 Abstract: The commission concludes that chloroform is dangerous only when the
function of the respiratory centers of the medulla oblongata had been
disrupted. They recommend that strict attention be given to respiration
throughout chloroform anesthesia. Institution of artificial respiration
within 50 seconds in the event of respiratory arrest is advised as well.
Also, the commission proposes that rapid elimination of chloroform
increases its safety for the heart.

General Notes: Third of 11 works on the Hyderabad Chloroform Reports enclosed in a
single phase box. Bound with the forth and fifth works.