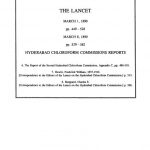 Title: The Hyderabad Chloroform Commissions : the report of the second commission : appendix c.

Abstract: This document, appended to the Second Hyderabad Chloroform Commission
Report, details animal experiments conducted by the commission without
the use of recording apparatus. The experiments were considered a
continuation of those made by the first commission. Their purpose was
to determine whether the heart stopped before respiration under
chloroform. They also attempted to measure the length of time available
to initiate artificial respiration after respiratory arrest. Among
other objectives, these experiments attempted to identify factors that
would either prolong or hasten the onset of respiratory arrest.

General Notes: Sixth of 11 works on the Hyderabad Chloroform Reports enclosed in a
single phase box. Bound with the seventh and eighth works.