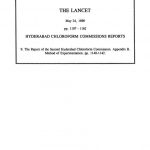 Title: The Hyderabad Chloroform Commission : the report of the second commission : appendix B.

Abstract: Appendix B of the Second Commission Report appeared after the
publication of Appendix C which had been published in the Lancet on
March 1, 1890. It describes various experiments investigating the
effects of chloroform on animals. The experiments were designed to
measure the amount of chloroform administered, and the effect on blood
pressure, on the movement of the heart, and on respiration.

General Notes: Ninth of 11 works on the Hyderabad Chloroform Reports enclosed in a
single phase box.