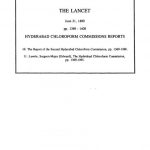 Title: The Report of the Second Hyderabad Chloroform Commission.

Abstract: This document introduces a series of laboratory animal tracings
obtained during chloroform experiments conducted by the Second
Hyderabad Chloroform Commission. Because of the serious nature of the
commission’s work, the Lancet refrains from accepting the conclusions
and proposes that the readers draw their own conclusions. The
commission maintains that chloroform affects respiration and not the
heart. Heart stoppage, it said, is caused by respiratory failure and
asphyxia. The commission considered bradycardia a warning, not a danger
in itself. The Lancet was skeptical, and planned clinical studies to
investigate cause of cardiac arrest.

General Notes: Tenth of 11 works on the Hyderabad Chloroform Reports enclosed in a
single phase box. Bound with the eleventh work.