Jackson CT. Protest of Dr. Charles T. Jackson against the bill providing for the recompense of the discoverer of practical anæsthesia, 1854. 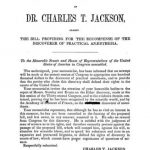 Catalog Record: Jackson CT. Protest of Dr. Charles T. Jackson against the bill providing for the recompense of the discoverer of practical anæsthesia, 1854.

Title: Protest of Dr. Charles T. Jackson against the bill providing for the recompense of the discoverer of practical anaesthesia.

Abstract: A memorial submitted to the United States Congress by Charles T. Jackson, on July 18, 1854, protesting the passage of an amendment to a bill to appropriate a sum of 100,000 to the discoverer of anesthesia. The amendment stipulated that the true discoverer will have to prove in the designated U.S. court their rights of claim and the courts will decide the true discoverer. In this protest, Jackson objected to the need for the parties to defend their claims in court. He contended that his rights had been recognized by the scientific communities of Europe, and to repeat his defense in civil court would be a waste of his time and resources.