Lawrie E. Chloroform : a manual for students and practitioners, 1901. 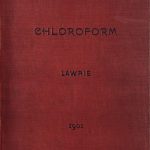 Title: Chloroform : a manual for students and practitioners / by Edward Lawrie

Abstract: Edward Lawrie’s name is most associated with the two Hyderabad
Chloroform studies which he initiated in the last decade of the 19th
century. This book, written upon his retirement in 1901, reiterated
all the old arguments which he had advocated on the safe administration
of chloroform.

General Notes: Some pages loose due to digitization.