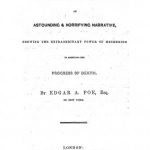 Title: Mesmerism “in articulo mortis” : an astounding & horrifying narrative,
shewing the extraordinary power of mesmerism in arresting the progress
of death / by Edgar A. Poe.

Abstract: Poe writes an account of a dying man being mesmerized shortly before
his death, who was kept alive for nearly seven months. The subject was
Ernest Valdemar of “Haarlem”, New York, a known bibliographer and
friend of Poe.

General Notes: Poe attributes mesmerism with a mysterious flavor that gives the
impression that it is of occult nature, allied with astrology, fortune
telling and spiritualism.