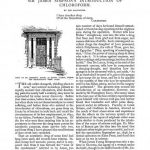 Title: Sir James Simpson’s introduction of chloroform / by his daughter.