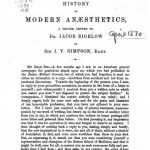 Abstract: This was one of the last professional writings of Simpson, written in April 1870 and printed for popular circulation in both the United Kingdom and America. At issue was Simpson’s acceptance of credit to the discovery of chloroform anesthetic during an award ceremony held in his honor held in Edinburgh. After being praised for his discovery, Simpson failed to make reference to the city of Boston where it was first used in the discovery of anesthesia. The tone and substance of this letter are significantly charged with regional and personal pride, defending the role of Edinburgh and Simpson himself in the discovery of chloroform anesthetic for surgery and midwifery.

General Notes: This second letter may have first been published in Journal of the
Gynaecological Society of Boston, volume 2, supplement to the May
number 5 issue, pages 1-19.

General Notes: Simpson’s first letter to Bigelow was published in the Medical Times
and Gazette on Januray 22, 1870.