To the Honorable, the Senate & House of Representatives of the United States in Congress assembled. 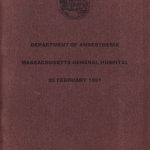 Catalog Record: To the Honorable, the Senate & House of Representatives of the United States in Congress assembled.

Title: To the Honorable, the Senate & House of Representatives of the United States in Congress assembled.

Abstract: A lithograph copy of the petition signed by physicians and surgeons of
Massachusetts and forwarded to the United States Senate and House of
Representatives on December 6, 1852 on behalf of William Thomas Green
Morton’s claim for recognition as the discoverer of surgical anesthesia.

Content Notes: “The undersigned herby testify to your Honorable body that in their
opinion Dr. William T.G. Morton first proved to the World that ether
would produce insensibility to the pain of surgical operations, and
that it could be used with safety. In their opinion his fellow men owe
a debt to him for this knowledge. Therefore they respectfully ask a
recognition by Congress of his services to his country and mankind.”

General Notes: This document is oversized and shelved separately within the rare book
room. A copy of the document was reproduced by Elliot V. Miller and
the Wood Library Museum of Anesthesiology and can be found at WO 211
E81 M890p 1852 RB.

General Notes: A full list of names was published in Nathan P. Rice’s Trial of a
Public Benefactor. The list of signatures in the document was six
names short of the published list in Rice’s book.