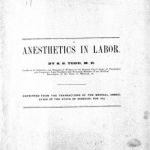 Catalog Record: Todd SS. On the use of anesthetics in labor, 1875.

Title: On the use of anesthetics in labor / by S. S. Todd.

Type of Trace: Reprinted from
Title: Transactions of the Medical Association of the State of Missouri, 1875.

Abstract: Todd reports on the results of a survey on the use of anesthesia during labor that he conducted twenty eight years after the discovery of anesthesia. Six hundred sets of questionnaires were sent to practitioners, 400 of which were directed to obstetricians, and 200 went to country practitioners in Missouri and Kansas. Two hundred sixty-two responses were received, some included detailed personal descriptions of the physicians’ impressions of anesthesia. Todd also consulted contemporary literature on the subject for this study. He concludes that the use of anesthetics during labor works excellently and will continue to increase in use.

General Notes: “Reprinted from the Transactions of the Medical Association of the State of Missouri for 1875.”