Warren JC. The influence of anæsthesia on the surgery of the nineteenth century, 1900. 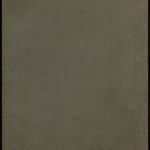 Catalog Record: Warren JC. The influence of anæsthesia on the surgery of the nineteenth century, 1900.

Title: The influence of anaesthesia on the surgery of the nineteenth century / by J. Collins Warren.

General Notes: “One hundred copies of this address were printed at the Merrymount Press, Boston in December, MCM.” — Colophon.

General Notes: “Being the address of the president before the American Surgical Association, MDCCCXCVII”–T.p.