Warren JM. The history of anaesthetics from an American point of view,1868. 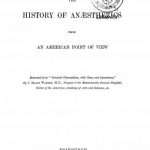 Catalog Record: Warren JM. The history of anaesthetics from an American point of view,1868.

Title: The history of anaesthetics from an American point of view / by J. Mason Warren.

Abstract: This pamphlet was originally published as the last chapter of “Surgical observations, with cases and operations.” This reprint was endorsed by James Symes who believed an eye-witness account of the initial period of the discovery would clear some historical facts about the American invention.

General Notes: The last section of the original chapter which discussed local anesthetic effects of refrigeration for minor surgery is not included in this reprint.