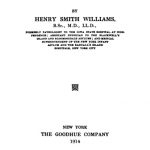 Provenance: Stamped with, “This book is a gift to the library of the New York Society of Anesthetists from the private library of Paul M. Wood, M.D.”

Abstract: Williams discusses and endorses of the morphine-scopolamine (“Dämmerschlaf” or “Twilight sleep”) treatment employed at the Freiburg university Frauenklinik. He maintains that the success of Twilight Sleep largely depends upon the dosage administered and the skill of the anesthetist. He also declares the doses required to ease labor pain to be safe, but the does required for surgery to be unsafely too high.

Content Notes: The Twilight Sleep — To Be and not to be — What is pain – and why? — Are labor pains a disguised blessing? — The twilight sleep and anaesthesia — being a woman — What the average layman can do — What some philanthropist may do.

General Notes: This work and Twilight sleep : a simple account of new discoveries in painless childbirth (call number WO 450 W724t 1914 RB, SydneyPlus Access Key adiq), are the same works except for minor differences: Painless Childbirth has two additional paragraphs at the end of the text, and they were published by different entities.