Curry J. Popular observations on apparent death from drowning, suffocation, &c. : with an account of the means to be employed for recovery, 1792. 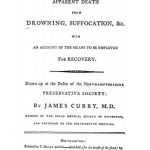 Catalog Record: Curry J. Popular observations on apparent death from drowning, suffocation, &c. : with an account of the means to be employed for recovery, 1792.

Title: Popular observations on apparent death from drowning, suffocation, &c. : with an account of the means to be employed for recovery / by James Curry.

Abstract: In 1791 Curry designed an endotracheal tube similar to Charles Kite’s.
He further described other instruments which also seemed to be based on
those which Kite had described. Curry’s primary purpose was to enable
non-medical persons to handle emergencies of apparent death before
medical help became available.

General Notes: This work was drawn up at the desire of the Northamptonshire
Preservative Society, which was instituted on October 9, 1789, to
popularize the methods of resuscitation.

General Notes: Issued in the same year under title: Observations on apparent death
from drowning.