Emerson W. A discourse, delivered in the First Church, Boston, on the anniversary of the Massachusetts Humane Society, 1807. 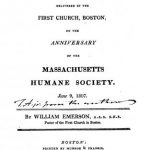 Provenance: Inscribed, on center of title page, with, “T.A.jr. from author.”

Subject: Resuscitation.
Subject: Humane Society of the Commonwealth of Massachusetts.

General Notes: In a protective wrapper.