Lower R. An account of the experiment of transfusion, practised upon a man in London, 1667. 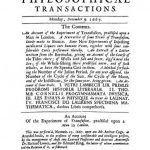 Catalog Record: Lower R. An account of the experiment of transfusion, practised upon a man in London, 1667.

Title: An account of the experiment of transfusion, practised upon a man in London / … Richard Lower and Edmund King.

Abstract: Edmund King reports on experiments he conducted with Richard Lower. The first, transfusing blood from a live calf into a sheep, confirming to them the theory that an animal could live on the blood of another. Then second, transfusing animal blood into a man, Arthur Coga, in late November 1667. A quantity of his own blood was drained by venesection. It was followed by transfusion of sheep’s blood without any reported
adverse effect.